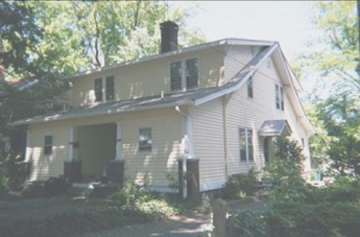 In my last post about painting Psalm 4 I mentioned that I might write something about Iredell House. As the writer on the House’s old website notes,

“A complete history of the Iredell community would be almost impossible to write.”

And this is true. But the basic outline goes like this:

Iredell House was an intentional Christian Community begun in 1990 by students of Stanley Hauerwas, professor of theological ethics at Duke Divinity School.

The founders, so the story goes, were learning about the impossibility of doing sound Christian theological/ ethical study apart from a community of discipleship. So they started a prayer group and eventually five of them moved together into the big yellow house at 1116 Iredell Street. Fittingly, it was communal prayer that drew me into the House’s life.

I happened upon Iredell House because three of my classmates at Duke Divinity School lived there. Lent 2005 at Iredell was my first experience with the liturgy of the hours; the community had adapted the Night Prayer liturgy specially for the House. The combination of sung prayers, hymns, confession, chanting the psalms and canticles, and passing the peace (exchanging hugs with every last person in the room!) struck a chord in me the first time I participated. Before long, I started coming to the house every Sunday night for prayer, and the House became the center of my community life in Durham.

What does intentional Christian community look like? In its particularity it is, in many ways, impossible to tell; one would have to know the personalities of the members who lived there, and experience for oneself how they interacted. To tell that well would require not only their permission, but much more space than a single blog post! But knowing something of its structure still gives some sense of how community life worked. Of course intentional Christian community can take many different forms. Since Iredell House always comprised students or other people who would move on to other endeavors within no more than five years, usually—and often much less time—it was important to have a set of practices that helped its members come to know and trust one another relatively quickly. At the center was a covenant, that the members would make with one another each year:

We are called out of our individual lives to be a community of Christian friends. We encourage each other in discipleship, living simply, and witnessing to the reign of God. Trusting in God’s grace, we are bound to each other in worship, confession and forgiveness, and hospitality to Christ in whatever guise he comes to us.

May the Spirit lead us.

The practices that fostered and sustained the community included, of course, prayer, but also weekly House Night: dinner, worship, and a meeting to discuss whatever concerns needed to be raised in order for the community to function well, or to plan special events. Often times, after prayer, an impromptu guitar-accompanied sing-along would begin. Or someone would make tea and we would sit around and talk for awhile after praying together. The House often had open meals, where some of the members would cook dinner and everyone could invite friends to join the community for a meal. A few times the house also hosted parties, or a “coffee house” style gathering where friends and guests would gather with the housemates to read poetry or stories, or to play music. Other more directly pragmatic practices included immediate washing of dishes after meals, Wednesday night group trash takeout after prayer, weekly chores of shopping for groceries and house cleaning, and that cooks never had to wash up after a meal. And at one point the House learned, or decided, that cooking for all communal House meals (including planning) should be a rotating responsibility among all members of the House. With widely disparate kitchen experience and food preferences, this practice resulted in some… interesting dinner menus.

After two years of attending prayer each Sunday night I joined the community and got to experience its life in full—including some of those curious meals. But what has stuck with me the most from House life is what hooked me in the first place: communal prayer. Much of that prayer liturgy remains in my memory. Many times since I lived in the House I have found myself reciting Psalm 91 or Psalm 4 in my head, or singing the opening prayer or Simeon’s song from Luke 2: “Lord, now you let your servant go in peace… My own eyes have seen the salvation, which you have prepared in the sight of every people.” I heard the words differently when praying them in that context because we made Simeon’s words our own: Our own eyes … The liturgy invited us to see the salvation of God.

Iredell House as such has now come to an end. This year all the members are moving out, and a different community will take the big yellow house. But the legacy of Iredell lives not only in the liturgy that remains in my mind and heart, but also in the people that the House had a part in forming over more than twenty years of community living. In January I discovered, much to my delight, that many former Iredellians became ethics professors who gather annually as members of the Society of Christian Ethics. (Maybe at some point we can gather a group of Iredell “alumni” for a reunion at SCE.) The end of the House as a continuously located community has inspired me to reflect on its legacy both for its former members and former “friends of the House.” I would be delighted to hear stories of Iredell. So if you are a past Iredellian or you found friends and community there while you lived in Durham, please be in touch.