Karl Barth spoke on several occasions about Christians’ need to read newspapers in light of the New Testament. Just so. But most Christians require guidance in order to do that in the way Barth means. Most of the world does not take the Gospel for granted—some simply people reject the Gospel’s account of reality by default; some actively oppose it. Christians often respond with fear, worry, and defensiveness, which suggest we believe disagreement or opposition actually threaten the truth of the Gospel. Absurd. If the Gospel is true, no human power make it false; if it is false, no human power can make it true. These realizations raise a salient question: How should those who take for granted the truth of the Gospel face encounters with those who reject or oppose it? Together, the Gospels and the book of Acts answer this question clearly:

In words and common life, tell the story of Jesus as good news without trying to enforce it, and see what happens. 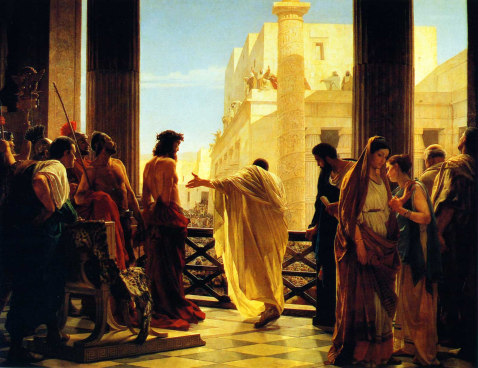 Most everyone who has heard of Jesus knows how his life ended. Far fewer people link his death to his repeated confrontations with the Pharisees, scribes, lawyers, and other authorities, and finally Herod and Pilate. Many Christians immediately spiritualize the significance of Jesus’ death, crafting elaborate doctrines of atonement. In attending to the spiritual, we see Jesus’ death as inevitable by divine ordination, and miss the political significance of deliberate choices Jesus made to live with integrity among powers that deemed him a threat, even as he knew they would likely kill him. Jesus knew, as Sam Wells has said, “what happens when the utter goodness of God is utterly vulnerable in the presence of the shortsightedness and cruelty of human beings.” Even in that light, these authorities could have reacted differently to Jesus; they could have accepted him, but they did not. In the Gospels, Jesus’ death does fulfill Scripture and God’s plan, but he also dies because he threatens the power of those who wield the sword and prioritize their own luxury over others’ basic needs. Once we see that Jesus’ death means more than atonement, and we remember that to be a Christian is, principally, to follow Jesus, we must face—with much less surprise—Jesus’ unpalatably constant insistence that his disciples will suffer as he did.

Jesus takes for granted that those who follow in his way will be hated, excluded, insulted, and their names “cast out as evil” (Luke 6:22). Jesus’ followers will face opposition, persecution, and suffering exactly because Jesus does: “The Son of Man must suffer many things, and be killed by the elders and the chief priests and scribes, and on the third day be raised. … If anyone would come after me, let him deny himself and take up his cross daily and follow me” (9:22-23). Again, when Jesus reproves the lawyers for building the tombs of the prophets, he prophesies that they will go on persecuting the prophets and apostles whom God will continue to send (11:49). So Jesus foretells the violent opposition the apostles he commissions (Acts 1:8) will encounter. Especially since he sends those apostles first to Jerusalem, the city that kills the prophets and stones those sent to it (Luke 13:34), they can expect to fare no better than Jesus. Lest any doubts remain, Jesus tells them explicitly: “they will seize and persecute you, betraying you to synagogues and prisons; you will be brought before kings and governors for the sake of my name” (Luke 21:12-13). At this point, Jesus himself will shortly stand trial before Herod the king (Luke 23:7-11) and Pilate the governor (23:1-6; 13-25). As with Jesus, so with the disciples. Jesus knows exactly the conflicts his followers will face.

Resistance to the way of Jesus—even if not universal or unmitigated—is a fact of Christian life. In Acts the apostles quickly discover how accurately Jesus predicted the opposition and conflict they would face because they speak, teach, and heal a crippled man in Jesus’ name. Jesus in John’s Gospel puts the matter starkly: “The servant is not greater than the master; if they persecuted me, they will also persecute you” (John 15:16). There is no reason to suppose Jesus’ followers today should fare differently.

In this light, modern Western Christians need to rethink the subject of persecution. We tend to think we should be able to follow Jesus without suffering for it. We’re obviously not reading the Gospel if we think that. Second, we wrongly count as persecution a prohibition against officially organized prayer in public schools or other public institutions,  sanctions against public display of the ten commandments in a context that would present them as normative, or—a particularly relevant example given the approaching season—businesses forbidding their employees to wish customers a “Merry Christmas.” And some of us worry that President Obama is a Muslim and will, therefore, depose Christians from our privileged cultural status. I recently ran across an article about a woman in Germany who interrupted an interfaith Muslim-Christian worship service and “denounced a Muslim call to prayer by reciting Martin Luther, proclaiming, ‘Jesus Christ alone is Lord over Germany!'” One commenter was outraged that a “Muslim Call to Prayer” should occur in a Christian church and asked, rhetorically, whether American Christians would “stand up for Jesus” when—not if—this sort of thing begins happening in America.

Such mild opposition hardly counts as persecution. Of course some people do not believe what Christians believe. It has always been so. More importantly, neither Jesus nor the apostles ever exhibit the smallest fear that others’ unbelief in Israel’s God poses a threat to their own life of faith. Others’ beliefs have no bearing on the truth of the Gospel, the being of Israel’s God, the reality of Jesus’ resurrection, or his identity as Lord of all. The apostles insist upon preaching in Jesus’ name because it is good news—not because they aim to secure their own survival or power, or the truthfulness of the message. They assume it is true! If it were not, they would have a much bigger problem. They do not argue against others in order to prove to themselves what they claim to believe, or to make it true by saying it loudest and longest. They do not believe the truth of what they speak depends in any way on them, and they live accordingly. The apostles’ example says that Christians should never accost others with talk of Jesus out of fear—fear that our faith isn’t strong enough, that the story might not be true, or that Christianity will lose the place of socio-political power it has held in the West since the 4th century. Christians’ social power has nothing to do with making the Gospel true. For the apostles, not having to make it true means they can show what it looks like when lived, as can Christians today. Indeed, the apostles seem to recognize something that modern American Christians seem to get backwards, namely, that the direst threats to the credibility of Christian life are not people who reject our beliefs or think them false. Rather, Christianity’s credibility suffers most from those who claim “Christian principles” or “Christian faith” but whose lives look little or nothing like Jesus’ life.

The story of Ananias and Sapphira in Acts 5 shows just how seriously lapses in obedience to Jesus threaten the early church’s life and witness. Acts presents Ananias and Sapphira in contrast to those in the community who sell a piece of property and bring all the proceeds to the apostles for distribution within the community. This couple sells a field and donates just a portion of the proceeds, but they do so in such a way that implies they give as generous and costly a gift as those who are giving the entire proceeds of a sale. In this community, such an act undermines both trust and economic stability—if the rich in the community deceptively withhold property for themselves, they will create mistrust, reinforce the economic disparity that the Gospel heals, and so undermine the community’s witness to Jesus. The immediacy and severity of Ananias and Sapphira’s punishment indicates how great a threat their action posed to the community’s life and its proclamation of good news. When the apostles confront Ananias and Sapphira with their deception, they fall down dead—the Holy Spirit removing them from the community like cancer from a body. Ananias and Sapphira lack the integrity to live the story they claim to believe. Such behavior does not threaten the truth of the story, but it puts an axe at the root of community life and undermines the proclamation of good news. How Christians live and present the story of Jesus has everything to do with whether others can receive the story as good news. Christian proclamation of Jesus’ story should always serve its being received as good news.

Jesus’ first apostles mostly told their story because they were found doing something (or something was happening to them) that required explanation: tongues of fire and new language at Pentecost (Acts 2) and a crippled man walking again (Acts 3-4). Sometimes they told the story in response to a direct request—an Ethiopian eunuch asking for guidance reading Scripture (Acts 8), or a summons from a centurion (Acts 10). The apostles generated, in Sam Wells’s words, “a context that demands an explanation, a living mystery that invites scrutiny.” The apostles’ preaching about Jesus gathered a community whose common life elicited wonder and joy from those who saw it. That is how the church should proclaim Jesus—with words and deeds commensurate to one another. If the church is “a context that demands an explanation,” then “the explanation is Jesus,” and it’s the church’s job to show how Jesus explains the life we’re living:

We should seek to embody in our church life such hopefulness, such faithfulness, such patience, such endurance, such forgiveness, such truthfulness that could only be possible if Jesus has saved us. We must ensure that salvation in Christ is never just a theory. It’s a reality. It has to be seen in context. And it could just be that that context, at the moment, doesn’t just mean the Jews. It means us.

Being that context does not mean we should not use words to tell Jesus’ story. We should tell the story as truthfully as we can, but our best telling will be with those who invite us to speak. Berating others with the Gospel does not only waste the time of all involved; it actually undermines the truth of the story we hope to communicate. Part of being a good witness of Jesus involves learning when to speak, when to remain silent, when to wait for an invitation to speak, and when to make an offer uninvited. But we need never ensure the truth of the story we tell. If we relinquish that vain task, we can instead begin spending our energy on displaying ever more beautifully, creatively, and compellingly, how Jesus’ story is true in our common life—indeed, how Jesus saves us.